Any unit that can Call for Transport

The V-35 Ox is a multipurpose VTOL aircraft of Global Defense Initiative appearing in Tiberium Wars and Kane's Wrath. It combines the role of Orca Transport and Orca Carryall that were used during the Second Tiberium War together as one. The Ox Transports are used in transporting its allies anywhere on the battlefield or to any safety zones. Ox Transports can be called by any unit that has the ability to call for transport for a fee of $500.

The Ox was designed after the Second Tiberium War to replace the aging Orca Carryall and provide air transport for infantry. It features tandem seating with the pilot in back and co-pilot in front similar to the attack helicopters of the 20th century. It came into use shortly after the Firestorm Crisis.

The craft is equipped with powerful VTOL engines which, coupled with an aerodynamic frame, give it the ability to fly at high speeds and deliver ordnance to the battlefield in minutes. It also has a refueling probe at the front to extend its range.

The V-35 Ox is primarily used for ferrying squads of infantry and smaller vehicles, such as the Surveyor, Pitbull or the APC, although it is fully capable of lifting the 65-ton MBT-6 Predator Tank should the need arise. Oxes can only be called in once the field commander has built an on-site Airfield to provide the clearance command.

Unfortunately, the aerodynamic frame forced the engineers to limit the amount of plating on the Ox. As such, it is very susceptible to anti-aircraft weaponry. It also cannot carry any of GDI's heavier vehicles such as Rigs, Mammoth Tanks, and walkers.

It is worth noting that Steel Talons and ZOCOM V-35 Ox Transports have significantly weaker armour than the vanilla GDI ones. 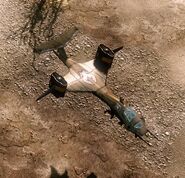 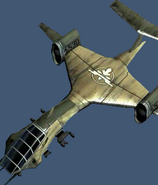 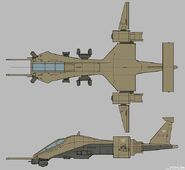