The CC-6 Pitbull is an armed reconnaissance vehicle used by GDI in Tiberium Wars and Kane's Wrath.

The Pitbull is a fast and maneuverable vehicle that specializes in reconnaissance and patrol. It uses its dual missile launchers to engage air and ground targets, and can be upgraded with an 80mm mortar for extra damage against surface targets and structures.

During the Second Tiberium War, convoy safety became an issue when Nod's affinity for small, fast, supremely maneuverable and heavily armed vehicles took its toll, and it soon became apparent that the supply trucks with their machine guns were sorely outclassed by the Sidewinder attack bikes, which were armed with dual missile launchers. This issue was brought to the Board of Directors' attention, and the Corps of Engineers was called upon to design a vehicle that could effectively counter Nod's ambush tactics. The result was two years in arriving.

However, the design of the vehicle's chassis and its armament were subjects of much debate. Proposals for both open and enclosed designs with armaments ranging from machine guns to recoilless rifles competed for approval. In the end, both designs were accepted: The enclosed cabin design was sent into the field while the open design was reserved for urban security.

Following approval by the Board of Directors, the design was put through rigorous testing at the Institute of Technological Research and Development in Maryland, where the majority of the bugs were ironed out and the vehicle was put into production immediately afterward.

The Pitbull was replaced with the Talon by the Ascension Conflict.

It is an ATV truck powered by hydrogen fuel cells on an elevated platform with a back-mounted rocket launcher and equipped with powerful and highly advanced G-Tech sensors capable of detecting stealth units. Its rocket launcher is capable of shooting down aircraft and is more than enough for damaging other vehicles and buildings, although direct combat with heavier vehicles is ill-advised, owing to the vehicle's necessarily light armour. It was also electrically powered, with redundant motors located in the wheels. There is a possibility that there is a civilian version. For security, DNA and dog tag scanners would only allow authorized personnel to operate the vehicle.[1]

The design of the vehicle was one of the most controversial topics among GDI commanders, who criticized the open topped design of the new jeep project as well as the back mounted machine gun that was intended as its primary weapon.[2] Eventually, after intense lobbying, the engineers revamped the design to allow it to operate in Tiberium contaminated areas. However, limited numbers of open-topped Pitbulls with back mounted machine guns remain in service in GDI controlled Blue Zones, as they are more effective at troop transportation and riot control than their hazardous environment resistant brothers.[3]

The Pitbull is also designed to carry an optional mortar upgrade from the GDI Tech center, converting it into a light artillery platform.

Pitbulls are GDI's primary means of detecting stealthed enemy units in the field, and are an important part of any group of GDI units out in the field. Unfortunately, Pitbulls have poor armor and their rocket launchers fire slowly. They are fairly effective at dealing with lighter enemy aircraft but are almost totally cost ineffective against units like Devastator Warships and Planetary Assault Carriers. They are more of a supportive unit for a whole attacking force in the anti-air role, rather than a unit primarily for it. In Kane's Wrath GDI's Slingshot is a much more effective platform for keeping enemy aircraft at bay.

Emphasis must be placed on their role as a support unit for GDI groups. While they can do things such as detect stealth tanks and deal some damage to them, they are in no way adequate for efficiently dealing with them. If they aren't being used for scouting, but for attacking, they usually will need some infantry or heavy armor support to back them up. It is important to try and keep them at the rear of any group of friendly units to maximize their survivability.

For 2000 credits spent at the GDI Tech Center, all Pitbulls in that commander's arsenal will have a mortar installed in addition to their standard armament. The mortar has superior range to the Pitbull's rockets and has a noticeable blast radius, though the round moves slowly and is poor at hitting moving targets. Mortars are very effective against enemy infantry that are caught in the blast, and allow Pitbulls to have superior range to most base defenses as well. This upgrade allows Pitbulls to serve as effective harassment units, and allows them to give more fire support in an attack with other units but also allow them to hit hard against buildings. GDI commanders should be wary that mortar shells do not distinguish between friends and foes and can very possibly damage advancing allied units instead of assisting them.

Originally, the Pitbull was conceived as an anti-infantry open-topped ATV, this version was shown in the E3 2006 trailer announcing the development of Tiberium Wars. This design drew much criticism from the fanbase, since the driver and gunner would have little to no protection from the poisonous effect of Tiberium, making it a pretty dangerous choice for deployment in Yellow or Red Zones.

The new Pitbull was redesigned as a sealed truck with an autonomous rocket turret. The old Pitbull design survives to this day, though, as wreckage that can be seen (or placed) on various maps.

Untextured version of the former

An open-topped Pitbull in TIBERIUM 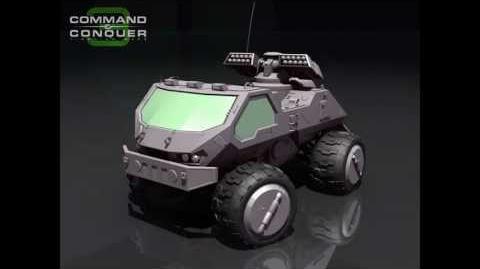